The day began with a hiking tour - and ended with a donation to the Balthasar Children and Young Adults' Hospice. At the recent summer BBQ held by Dallmer's sanitary technology department, it wasn't just food and celebrations on the agenda; they were also collecting money for a good cause.

"When we were planning the staff party, several colleagues expressed the desire to combine it with some sort of charitable deed" Marcel Kirschner, works council chairman at Dallmer, explaining the motivation for the unusual fundraising drive. No sooner said than done! While enjoying grilled dishes and home-made salads, the hat was passed around and the final total was 500 euros, which the works council proudly donated to the Balthasar Children and Young Adults' Hospice. A wonderful and productive end to an informal and convivial works do –

a much-needed and appreciated donation for critically ill children and youngsters.
"These children don't essentially need more, they need more essentials", said Britta Gerhard explaining her work and the concept of the children's hospice. And key essentials in such a sad life situation, apart from nursing care, are individual and personal attention and the ability to spend as much time as possible with family. In spite of the very sad situation "it isn't all tears and sadness", said Britta Gerhard, "the hospice is also often filled with laughter. Our focus is on life and the children are very grateful for that."

In order to provide these much-needed services, the children's hospice relies very much on donations. The non-profit organisation covers 70% of its costs through voluntary donations, 30% is covered by health and nursing care insurance companies. This pays for 8 hospice places for children and a further 4 for young adults. Each year, the Balthasar hospice looks after some 300 children and their families, even though demand is actually considerably higher.

The Dallmer works council is proud of the generosity of its workforce. "It's actually a very simple idea -", concluded Marcel Kirschner, "to use an informal celebration as a means of helping others less fortunate. We would like to think that others will be inspired to do something similar." 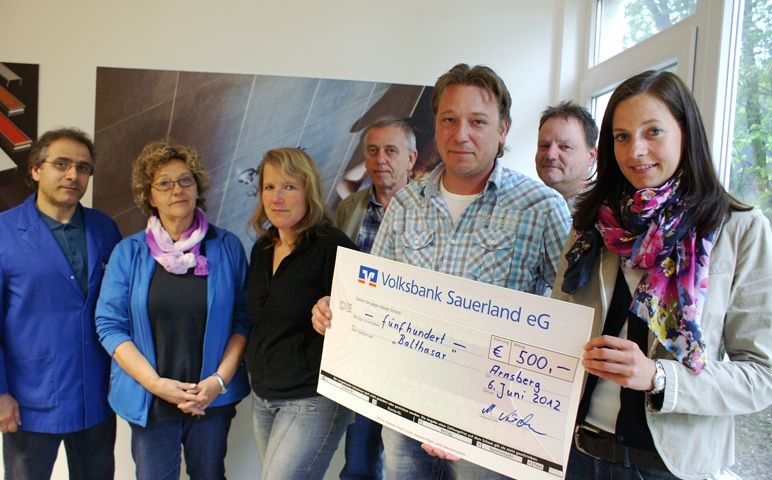 Using festivities to help others less fortunate: The works council of Dallmer's sanitary technology department hands the donation collected at its recent BBQ to Britta Gerhard from the Balthasar Children and Young Adults' Hospice.