Under the motto "The future of construction", BAU 2017 Munich opened its doors from 16 to 21 January. The world's leading trade fair for architecture, materials and systems will once again be hosting national and international manufacturers from the industry – including Dallmer GmbH + Co KG.

The fair portfolio of this family-run company from Arnsberg includes pioneering drainage systems and designer classics for level-access showers. The focus will be on its flush-in-floor CeraFloor shower channel and its front-of-wall CeraWall shower channel. These shower channels offer barrier-free accessibility, exclusivity, simple cleaning and highest quality in modern bathrooms. Dallmer will also be presenting its new DallFlex drain body, which is compatible with five designer shower channels, is impressively easy to install and offers top drainage rates.

At its 100 m2 stand, Hall A4, stand 325, the Dallmer experts will be there each day of the trade fair offering visitors information on all aspects of drainage systems in and around a property. 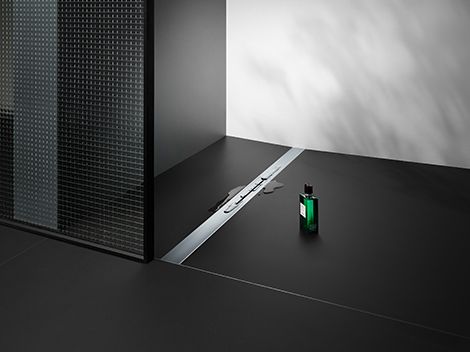 Dallmer presents the CeraFloor shower channel at BAU 2017. Dallmer will also leverage BAU 2017 to showcase a range of its designer shower channels for barrier-free bathrooms.